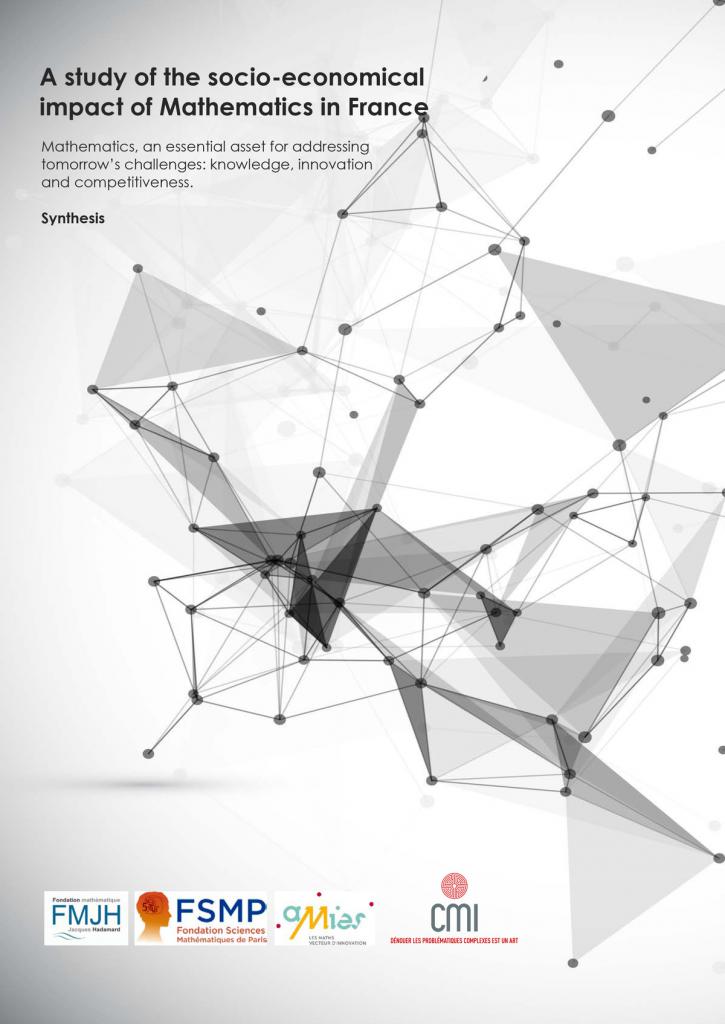 Mathematical academic research and the industrial sector in France have a long and successful history of cooperation. The pioneering work of Jacques-Louis Lions had a huge impact on the development of synergies between mathematics and the business world. Examples of success stories in France, and elsewhere in Europe, can be found in a publication of the European Forward Look in Industrial mathematics (2010), where 22 out of the total 108 are from France, with a large proportion from major groups in energy (EDF, Alstom, CEA, Total), transportation (Renault, Peugeot, Airbus, EADS) and telecommunications (Orange).

Mathematics plays an essential role for growth and innovation. In France, this fact has been made explicit and measured in 2015 in “A study of the socio-economical impact of mathematics in France” produced by a French strategy consulting firm, CMI. This study shows that mathematics is an “essential asset for addressing tomorrow’s challenges for knowledge, innovation and competitiveness”. The impact of mathematics in terms of jobs is evaluated at 9% and the added value has been estimated at about 15% of total French GNP. Such impact studies had been previously done by Deloitte, in the UK in 2012, and in the Netherlands in 2014, using the same methodology and finding similar results. These studies proved the importance of mathematics in interaction with fast-growing sectors and key technologies.
Inria is an important actor in promoting collaborations between French laboratories in Applied Mathematics and Industry. Over the years, many universities, like Grenoble, Toulouse, Saclay have developed partnerships and joint projects  with local companies.
The French education system offers a wide range of specific programs to students interested in positions in industry involving mathematical skills: engineering schools, Master’s programs in mathematical engineering and data science,  etc.

The need to coordinate and enhance the relationship between the mathematical community and the industrial/services sector led to the creation of a specific national agency in 2011, AMIES, and of a new European coordinating network, EU-MATHS-IN, in 2013. A particular effort has been made to promote collaborations with small and medium-sized enterprises and startup companies. Within 4 years, AMIES succeeded in doubling the number of companies that have active collaborations with mathematical departments, and the goal is to maintain a 20% growth rate in order to double those numbers again by 2020. To this end, AMIES initiated  several programs such as for instance SEME (Semaines d’Études Math-Entreprises), inspired by the ESGI (European Study Groups with Industry), launched in Oxford in 1968. Several international SEME sessions will be organized in 2022, in the wake of ICM 2022. Let us also mention the success of the Math Job Fair (FEM), with an increasing number of participants (more than 1800 in the fourth job fair in 2014).

In recent years important efforts have been made to increase the impact of Mathematics in the society, in industry, and in the development of new technologies. France has played an important role in this at the national and at the European level. See more about this here.

The French mathematical community has a long experience organizing large events which mobilize mathematicians, students and industrialists.  The Math Job Fair, FEM, which exists since 2012, is the largest of them, and it is described in this article.

On the initiative of CNRS and SMAI, with the support of Inria, AMIES, SMF and SFdS, workshops are organized several times a year to allow  mathematicians from academia and  industry  to present and discuss new results and possible new applications.

The organization of ICM 2022 in Paris will be supported by large French companies as explained in the letter of intent from MEDEF, the largest employer federation. We also anticipate that some of the most innovative and technological small and medium-sized enterprises and startup companies will support events showcasing the importance of mathematics for the acceleration of innovation and the development of the technology.

As well as organizing a number of SEMEs as satellite events of ICM 2022 in Paris, other activities, such as a series of exhibitions showcasing success stories of industrial collaboration could be organized in Paris and other French cities in 2022.