The team and supports

Born in 1970, Anne Philippe is a specialist in statistics. Her research interests include stochastic processes with long range dependence and applied Bayesian statistics.  Among her major contributions are the asymptotic method in statistical inferences for long memory process. She has also contributed in the development of Bayesian approaches for chronological modeling of archaeological data.

Born in 1972, Ariane Mézard works in number theory and arithmetic geometry. She is known for her works in p-adic Hodge theory related to the Langlands program. She received a PhD in mathematics in Grenoble in 1998. After a post-doctoral position in Regensburg, she became assistant professor at the University of Paris-Sud in 2000. From 2006 to 2012, she was professor at  University of Versailles, where she served as head of the Research laboratory. From 2010 to 2015, she has been Junior Member of Institut Universitaire de France. Since 2012, she is professor at University Pierre et Marie Curie.

She is editorial board member of Panoramas et Synthèses. Since 2013, she is deputy director of the Fondation Sciences Mathématiques de Paris and member of the French adhering body of the International Mathematical Union. Since 2014, she spent several long term visits abroad, including at Mathematical Sciences Research Institute (Eisenbud Professorship, Berkeley), University of California, Berkeley (Fulbright Scholarship) and Research Institute of Mathematics Science (Kyoto).  You will always find in her luggage some delicious specialities, taken back home as a treasure.

Bertrand Rémy was born in 1973. His general field of research is group theory. He is interested in the interplay between geometry and group actions in various situations, the notion of symmetry being the bridge between the two fields. The involved mathematical structures are algebraic groups, metric and measured spaces, and a class of spaces called buildings. The latter spaces are designed to understand better algebraic groups (most of the time over topological fields), and infinite-dimensional generalizations of them. He co-organized summer schools on geometric group theory and differential geometry (Grenoble, 2004) and on algebraic groups and representation theory (Lyon, 2014).

After a Phd defended in Nancy in 1999, he has been a post-doctoral fellow at the Hebrew university in Jerusalem, an assistant professor at Université Joseph Fourier (Grenoble), and a full professor at Université Claude Bernard (Lyon) since 2004. He is currently full professor at École polytechnique (Palaiseau). He belongs to the editorial board of the Annales de l'Institut Fourier and is head of the editorial board of Panoramas & Synthèses. He was a junior member of the Institut Universitaire de France (2009-2014), received a Bessel research award from the Alexander von Humboldt foundation in 2014, and gave a talk at the ICM 2014 in Seoul (section: Lie theory and generalizations).

Denis Talay is a specialist in stochastic modelling, probabilistic techniques of analysis of linear and non-linear partial differential equations, numerical probability, and financial mathematics. His most striking papers concern the discretization of stochastic differential equations and the stochastic particle systems with McKean-Vlasov interactions. These last years he concentrated his research on the analysis of strongly singular stochastic computational models. He presented some of his recent results as invited speaker at ICM 2014 in Seoul.

After having defended his PhD thesis in Probability under É. Pardoux's supervision, he joined Inria Sophia Antipolis where, for more than twenty years now, he has been heading research teams in stochastic modelling and stochastic numerical analysis. In parallel he has been Professor at École Polytechnique in Paris for thirteen years. From 2006 to 2009 he was President of the French Applied Maths Society (SMAI) where he is now chairing the Scientific Committee. From 2010 to 2014 he was Head of Science and Chairman of the project-teams committee of INRIA Sophia-Antipolis Méditerranée research center. He had and still having an important editorial activity in the board of several first rank journals in Probability, Numerical Analysis, and Scientific Computing.

He is fond of literature and classical music. He also likes to play piano and tennis - unfortunately, in both cases his style is laborious.

Born in 1967, Etienne Gouin is not certainly known for his mathematical works because he has never made it. But nobody's perfect. After studying law and political sciences he joined the CNRS (NATIONAL CENTER FOR SCIENTIFIC RESEARCH) in 1992 when he has occupied several jobs (jurist, person in charge of markets and contracts, administrative executive officer of the Institute Henri Poincaré CNRS-UPMC with Michel Broué) before taking from his creation, beside Jean-Yves Chemin, the Administrative and Financial Department of the Foundation Mathematical Sciences of Paris. He is also awarded a diploma by the ESSEC Business School - AFF fundraising.

In a private capacity, Etienne practises the Jujitsu (which must retain the part of its development in France with Frédéric Joliot-Curie and many researchers of the Montagne Sainte-Geneviève in Paris).

Born in 1958 in Mulhouse, François Loeser works in algebraic geometry, arithmetic geometry, singularity theory and model theory. He is known for his role in the development of motivic integration and his work in non-archimedean geometry. He received a PhD in mathematics in Paris in 1983 under the supervision of Bernard Teissier. Since 1989 he is Professor at University Pierre et Marie Curie in Paris. From 2000 to 2010 he was on leave at the École normale supérieure where he served as Department Chair from 2008 to 2010. He is currently Chair of the French adhering body of the International Mathematical Union. Since 2014 he is Editor-in-Chief of the Journal of the European Mathematical Society. He has been Editor-in-Chief of the Journal of the Institute of Mathematics of Jussieu (2011-2016) and of Astérisque (1993-2000). Notable awards include the CNRS Silver Medal (2011), an ERC Advanced Investigator Grant (2009), and the prize Charles-Louis de Saulces de Freycinet of the French Academy of Sciences (2007). He was a plenary speaker at ECM 2008 and a sectional invited speaker at ICM 2014. Since 2015 he is a senior member of the Institut Universitaire de France.

François is also an avid outdoor enthusiast. As an experienced ultrarunner he enjoys long hikes in remote wilderness. His interests include listening to jazz and classical music, especially string quartets.

Born in 1956 in the Basque Country, Maria J. Esteban is senior researcher at CNRS and she works in nonlinear analysis and mathematical physics. The main source of the problems that she has worked in all over her career is Physics and sometimes also Chemistry. Mathematically she is a specialist in the study of variational problems for the resolution of nonlinear partial differential equations. Her main contributions are in the areas of mathematical (variational) methods in Relativistic Quantum Mechanics and in Quantum Chemistry, fluid-structure problems, the study of the qualitative properties of nonlinear elliptic and parabolic equations and of the extremizers of functional inequalities.

Apart from her research work, Maria J. Esteban is very involved in the mathematical community’s societal activities. Among other things, she has been chair of CEREMADE, the Applied Mathematics Department of the University Paris-Dauphine, President of SMAI (French Society of Applied and Industrial Mathematics), Chair of the Applied Mathematics Committee of the EMS (European Mathematical Society), Board Member of the European network EU-MATHS-IN, and she is currently the President of ICIAM (International Council for Industrial and Applied Mathematics). She is co-editor in chief of the Annales Inst.H. Poincaré (Analyse non linéaire). She was Plenary speaker in the ICMP 2003, Mary Cartwright lecturer in 2015, is member of Jakiunde, the Basque Academy of Sciences and Letters, and has an honorary degree by the University of the Basque Country. She is sectional invited speaker at ICM 2018. Currently she is member of the French adhering body of the International Mathematical Union, the C.N.F.M.

Philippe Helluy was born in 1968. He studied aeronautics in Toulouse from 1987 to 1989, and did his PhD in applied mathematics in 1994. He was assistant professor in Toulon from 1994 to 2006 and since 2006, he is professor at the University of Strasbourg. He is interested in mathematical and numerical modelling for physics. His research is often related to industrial problems and to High Performance Computing. What he prefers is to use a nice mathematical object (such as (max,+) algebra) to solve a concrete problem (such as predicting a phase transition).
He was responsible for HPC prospective at the Mathematics Institute of CNRS, INSMI, from 2012 to 2015. He is currently responsible of the research team “MOdelisation and COntrol” at IRMA (the Institute of Mathematics of Strasbourg) since 2006. He is also head of the Inria team TONUS “Tokamak Numerical Simulations” since 2012.
From 2018 on he will be director of IRMA.

When he was younger, Philippe practiced rugby and skydiving, but now he is cycling and jogging.

Roger Mansuy holds a PhD in probability, which he prepared under the supervision of Marc Yor. For twelve years now, he has been teaching mathematics and computer science to first class international undergraduate students, with the aim of preparing them for highly competitive exams.

Alongside his teaching duties, he is committed to the diffusion of scientific knowledge, for instance by publishing primers in linear algebra or probability, writing mathematical chronicles in magazines, or organizing a seminar called « Mathematic Park ». He has additionally served for five years as the manager of wide audience events for the Institut Henri Poincaré.

When he is not practicing or reading maths, Roger likes discovering the world through travels or books.

Stéphane Cordier was born in 1970 in Normandy. After a PhD at the École Normale Supérieure de Cachan and École polytechnique, he was Assistant Professor at the University Pierre et Marie Curie from 1994 to 2000. Since September 2000, he is Professor at the University of Orléans. He has been the head of several important research structures: director of the Fédération Denis Poisson, head of the Orléans Mathematics Department (MAPMO), head of the Regional Cluster of Scientific Computing and Modeling of Orléans-Tours (CaSciMoDOT), director of a Pluridisciplinary Institute on "Modeling, Systems and Languages" and leader of several scientific projects related to hydrology and natural risks. For many years, he has also been extremely active inside SMAI (Société de Mathématiques appliquées et industrielles).

At the creation of AMIES, the French agency aiming at developing relationships between the mathematical community and business companies, in 2011, Stéphane joined the team to coordinate the two first Math job fairs (FEM), attracting more than thousand participants every time.  In 2014, he becomed director of AMIES which, in 4 years, impulsed scientific projects with more than 100 small companies.

Sylvie Benzoni-Gavage (http://math.univ-lyon1.fr/~), born in 1967, works on Partial Differential Equations and their applications to continuum mechanics and other physical models. Her main research interests concern hyperbolic partial differential equations, surface waves, dispersive hydrodynamics, phase transitions and traffic flow. Among her contributions one may quote the stability analysis of liquid-vapor phase transitions and various well-posedness and stability
results for a general class of dispersive systems of conservation laws referred to as Euler-Korteweg system.

She received her doctoral thesis from the University of Lyon at École Normale Supérieure de Lyon. After a few years as a CNRS researcher she was appointed  as professor at Université Claude Bernard Lyon 1 in 2003. From January 2016 to December 2017,  she was the head of the Camille Jordan Institute, a mathematical laboratory gathering more than 180 faculty of the Lyon-Saint-Étienne area. Since January 2018, she is the director of the Institut Henri Poincaré.

She loves teaching and raising public awareness of mathematics and its history. In particular she has been involved in the "Mathematics of Planet Earth" initiative and is a member of the RPA committee of the European Mathematical Society. She is a supporter of diamond open access journals, especially as a member of the editorial board of two of them, Confluentes Mathematici and Journal de l'École Polytechnique. She is also engaged in organizing big mathematical events, the latest one being the 550-participant Equadiff2015 conference.

Her hobbies consist of all sorts of DIY and gardening, which help her pretend not thinking about math. Otherwise what she likes most is traveling to remote places on Earth with her family. 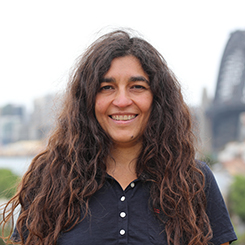 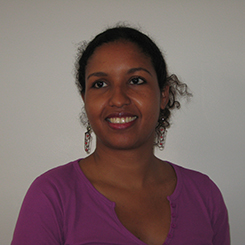 Graduated from Télécom INT (then Télécom Sud-Paris) in 2001, Gaël Octavia was firstly an information systems engineer and then became a scientific journalist. From 2002 to 2008 she works as a writer and sub-editor for Tangente, a magazine of mathematical content for the public in general. In February 2008, she joins the FSMP as Communication Manager. She is also a playwright and novelist.